How and Where Can You Store Data For a Long Time?

Read about choosing a proper device for storing your data safely. From time to time, many of us may think about how long we could store our data. It should be noted that a common laser disc with a record of some important event in your life or necessary data will be impossible to read in just 5 or 10 years. That is why it is worth looking for more reliable ways of storing data.

When choosing where you want to keep your data, you should consider reliability of media and storage life under various conditions. To cut a long story short, these are things to be planned in advance. 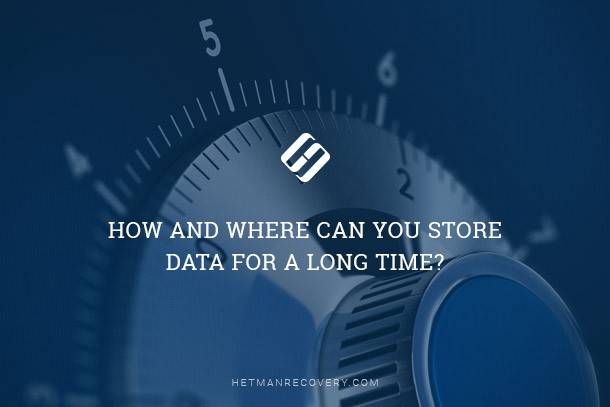 General Principles Of Storing Data To Extend Its Lifespan

Today there are several principles of storing data which suit any type of information be it text, common files or pictures. In any case they give you high probability of accessing the data in the future.

The first aspect is the large number of copies. There is no need to argue that a book published in millions of copies or photographs made in several copies for every relative and saved to several media will be easier to access in a few years.

In addition, it is not worth keeping data in non-standard manners or in some specific formats, languages etc. For example, text files are better to be stored in such formats as ODF and TXT instead of DOCX and DOC.

We also do not recommend storing data in compressed and encrypted files because if the archive’s integrity is damaged even slightly, all the information in it may become inaccessible. For example, to store media contents it is better to use WAV format. Pictures will be stored perfectly in an uncompressed format like RAW, TIFF or BMP. A good choice for video files is DV formats, though they are not very convenient to use because they are very big in size.

Besides, you should regularly check the data for integrity and accessibility. In addition, it can be saved again with more up-to-date methods and equipment.

Generally speaking, these are main principles of storing data that can keep it safe for a long time. Now, the time has come to select a suitable media.

Speaking of the most popular ways to store various data, we should mention HDDs, USB drives of all kinds, laser discs and cloud storages. Though the latter cannot be classified as media, they do exist for the same purpose. To select the most reliable way of storing information you should study each of them in detail.

Standard HDDs are most often used for storing all kinds of information. When operated in normal conditions, a typical HDD lifespan ranges from 3 to 10 years; its actual life cycle depends on external influences and the quality of the device itself. It should be mentioned, that if you record some data to an HDD, then disconnect it from the PC and keep in a safe place, it will store data for as long as a regularly used HDD would.

To a larger extent, data safety depends on external factors such as hits and blows, even weak ones, and shaking. Less influence can be caused by magnetic fields, but they can also make an HDD become inoperable.

Such media can store information for about five years. However, ordinary USB drives do not always live so long – just a small static electric discharge can knock the USB out and the information becomes inaccessible. The storage life can be extended up to eight years but for that purpose, they should be disconnected from the PC and kept in a safe place.

Out of all physical media, optical discs have the longest storage life period. They can remain accessible up to a hundred years. However, a number of aspects have to be considered. For example, a recorded disc can be read for only a couple of years. To eliminate all possible problems, these aspects have to be studied in detail.

Nobody can predict the exact time how long data can be stored in a “cloud.” Definitely, data can be stored for a very long time, at least as long as a provider company finds it profitable. It should be noted, that companies are not responsible for loss of information, and this fact is specified in the license agreement. Besides, there is a possibility of your account to be hacked by intruders, or your information lost due to some other causes.

Taking everything into account, it follows that the most reliable and durable way to store your data is the good old optical disc. However, HDDs and cloud storages are more convenient. You should not exclude any of the methods as their combined use increases the chances for data safety.

Most users are likely to hear the information that a laser disc can store data for a enormous amount of time. At the same time, some of us faced the situation when a disc recorded a couple of years ago could not be read though the actual CD-ROM drive was completely in order.

As a rule, the cause of quick loss of data from an optical media is its poor quality. Besides, other factors may include the disc type, storage conditions and incorrect recording mode.

Multi-session media with the RW marking cannot store data for a long time. On average, an ordinary single-use disc can store data longer than a multi-use one. Research suggests that almost all CD-R media can store data for almost 15 years. This is the figure for almost 50% of DVDs bearing the R marking. Other tests suggest that a CD-R can work for about 30 years: an impressive lifespan isn’t it?

Ordinary cheap discs sold in the street are not very suitable to store information. That is why we do not recommend using them for important data without making another copy; after all, it is better not to use them at all.

Besides, it is also not advised to record a disc in several stages. When recording, it is better to use the lowest speed accessible for this disc and do it with specialized software.

In no way keep optical media where they can be exposed to direct sunlight. Other factors capable of affecting the disc are sharp changes in temperature, high humidity and, certainly, mechanical damage. It should be noted that safety of the recorded information may be influenced by the quality of the drive you have used to burn this disc.

The Choice of Media

All optical recordable media may differ in the material on which the data is burned. There also may be differences in the reflecting layer, solidity of the base layer and, of course, the quality of manufacture. As to the last point, discs of the same model but produced by different factories may also differ much in their quality.

These days, such materials as phthalocyanine, cyanine or metallized Azo are used in creating the burning layer in optical media. The reflecting layer is usually made of gold, silver or their alloy. The most optimal combination of all these materials is phthalocyanine with gold. These materials are the most durable and antioxidant. However, there may be other combinations as well, depending on the disc manufacturer.

Nowadays it is quite difficult to find an optical media for archiving. However, you can order such media at online stores like Amazon.com or similar shopping websites.

Moreover, data can be stored in media with the marking Archival Gold, but you should not hope too much. It is better to use the principles of data storage that we have described above.

In general, this is all the information concerning data safety. In conclusion we can say that to keep your data in a safe way you need to observe the principles of storage. For this purpose, you can use optical media, but only those of high quality and made by reliable manufacturers.

The only disadvantage of an optical media is that you cannot restore data from the disc, if it becomes unreadable for some reason. However, data can be restored from any other media with the help of data recovery software, if it is not a physical breakage, of course.