Read about restoring Windows 10 bootloader from a working or faulty system with the command prompt. Recovering bootloader after installation of Linux, Ubuntu, Windows Often the reason for the operating system to fail when loading is the damaged bootloader Windows 10. Recovering system files with the System Restore function doesn’t help to bring the bootloader back to life. Then how can it be recovered? 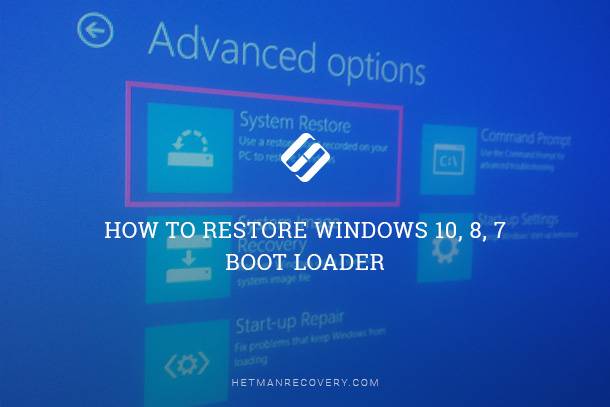 The operating system Windows 10 won’t load – what should I do?

Recover The Data Lost Because of The Damaged Bootloader

Recovering Windows bootloader, damaged or overwritten system files, file system errors or HDD bad sectors are onluy some of the things to cause loss of data.

Download for free and scan your computer with Hetman Partition Recovery. Learn about the program functions and step-by-step guide.

If damaged, Windows bootloader can be recovered with the use of command prompt.

If the system won’t load, launch the diagnostic utility from the boot disk: If you can load Windows, do the following:

Use the command bootrec.exe to recover the bootloader:

If you don’t have an authentic Windows boot disk at hand, you can load the computer, including for the purpose of recovering the bootloader, with the help of a boot selection disk such as LiveCD. As a rule, such disks feature several programs for bootloader recovery Windows 10. Such programs can be launched right from LiveCD – they are portable and do not require an operating system to start from the computer’s hard disk.

For this purpose, do the following:

Sometimes the main operating system Windows 10 won’t boot if Ubuntu Linux is instaled as the second operating system. It is connected with the probable overwriting of Windows boot sector.

This is what you should do to recover Windows loader and still have the opportunity to load Ubuntu Linux:

As a result of, Windows bootloader will be restored, but there is high risk of damaging Ubuntu Linux loader. To restore its operability do the following:

After you have done it, your computer can boot with either Windows or Ubuntu Linux.

Is the Windows 10 bootloader recovered now? Leave your feedback and ask questions in your comments.