How to Restore Files From a Windows Image

Windows offers a fail-safe way to recover an entire hard disk from a system image, and we’ll find out how you can use it for recovering specific files. Windows 10 OS provides ample opportunities for data backup which include tracking file history and functionality that allows creating an image of the entire system. The concept of the system developers is that the functions of File History are required for convenient and rapid everyday recovery of user data, while a system image is created not so often and allows complete recovery of a partition (including system files) to a certain operable OS.

Fortunately, this task is rather easy. The matter is that the standard system of creating a backup system image copy in Windows 10 is based on the concept of virtual disks (Virtual Hard Drive). That is, images are recorded and stored as virtual drive files in the format vhdx (Virtual Hard Drive). Such virtual drives can be easily mounted with standard features of Windows 10 and be operated as ordinary drives within the system. Attaching such disk to the system, a user can restore from the backup system image separate files and directories.

System image is usually backed up to a separate physical disk or a network folder. That is why the first thing to do is to connect to the computer a media containing a backup copy of Windows 10 image (or connect a network folder).

Open the computer management console Computer Management and go to disk manager Storage->Disk Management (this console can be launched from the menu WinX by pressing the key combination Win+X and selecting the item Disk Management). In order to mount a vhd virtual disk select the item Attach VHD in the Action menu.

In the window that appears click Browse and specify the path to vhdx file. This file is usually stored on a drive that contains a backup system image copy in the directory with a name in the following format [Backup_Drive]:\WindowsImageBackup\[PC_Name]\Backup xxxx-xx-xx xxxxxx. In our example, complete path to the vhdx file is as follows: \\[PC_Name]\VHD\08_01_2016.vhd. 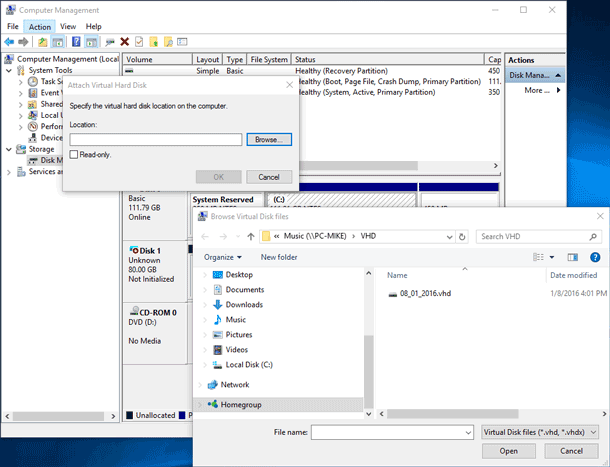 After the virtual drive has been mounted it has to be assigned a drive letter. To do it, click the right mouse button on the drive and select the menu item “Change Drive Letters and Path”. 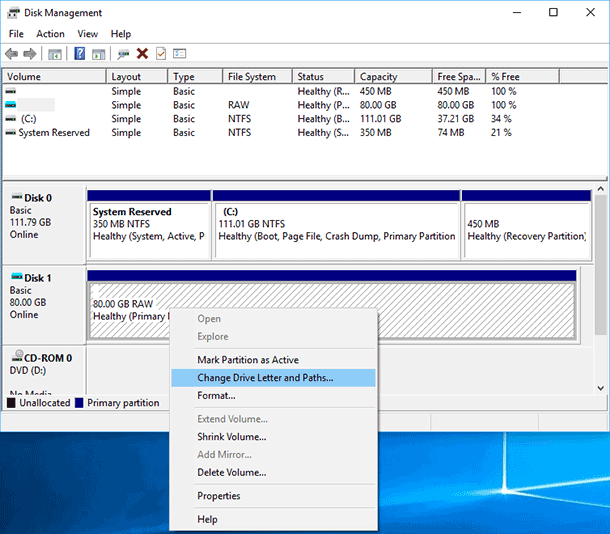 In the window that opens click Add and assign any letter to the drive, for example, E: 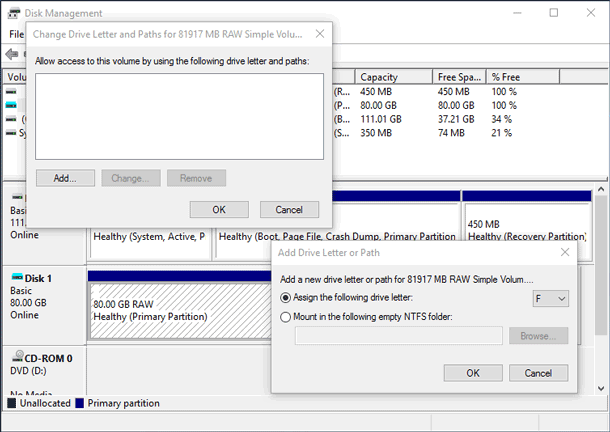 After this operation, a new drive will appear in the system, to which letter E:\ is assigned. Open in with Windows Explorer or any file manager and find the files that need to be restored. 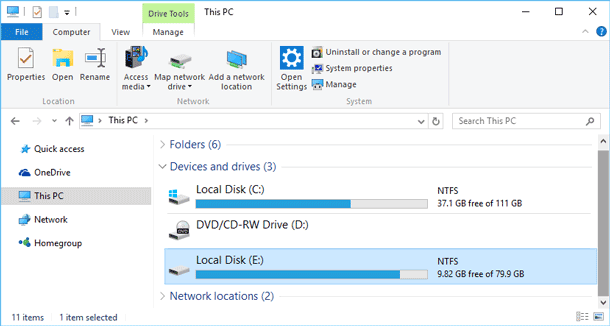 Advice. User documents (photos, videos, music and other documents are usually saved to user’s profile in the directory E:\Users\{user_name}.

After you have found and copied the necessary files, the external disk can be disconnected and as a result, the virtual vhd disk will also disappear from the system. Separate files from the system image can be recovered in the same way in Windows 7 and 8 as well.

If suddenly happened the lost of VHD image of Windows (for example, accidentally or intentionally deleted) it can be recovered by Hetman Partition Recovery. After recovering it with data recovery software you can restore individual files by stated above algorithm.