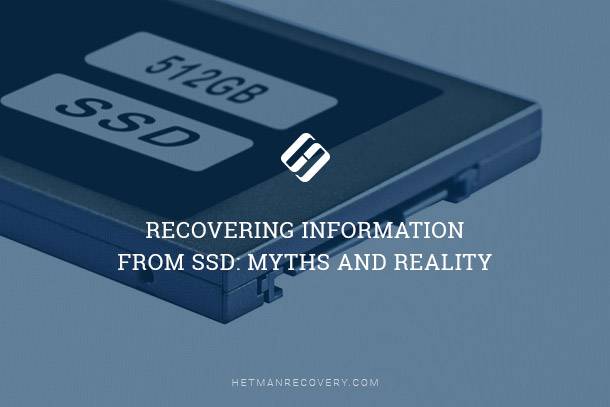 Is it possible to recover files lost from an SSD drive? The situation with SSD data recovery is very different compared to what we’re used to with magnetic disks. It is not always possible to recover files from an SSD – but it’s not always impossible either. Let’s look at different scenarios and see what can be done if a proper tool (such as Hetman Partition Recovery) is used.

Recovering Files from an SSD

More often than not, files that were deleted from an SSD drive will not be recoverable. This may not be what you wanted to hear, but there is a thing specific to SSD drives that does not exist on traditional media: TRIM. The TRIM command causes the SSD controller to physically clear data blocks that were used to store deleted files. In other words, the controller will receive a command the very moment you delete a file. Granted, the actual data wipe does not occur momentarily, but today’s SSD controllers are designed to report a data block empty as soon as the command is received – even if the actual wipe of that block occurs at a later point.

The speed of SSD drives from vendors like Corsair, Kingmax, Kingston, PQI and others is virtually the same. Regardless of the manufacturer, you can say it for a fact that the execution of the TRIM command is a nearly 100% guarantee of file deletion.

Is there anything you can do about it? Not much, really. However, there are exceptions from this rule. If the TRIM command has not been executed or is not supported by either the disk, the operating system, or the interface between the computer and SSD drive, you may still undelete files as if they were stored on a traditional disk. Currently, most SSD drives support TRIM. However, the current version of MacOS doesn’t, so you can often recover files deleted on a Mac PC. Older versions of Windows (before Vista) do not support TRIM. Finally, TRIM is not supported over USB and FireWire protocols, so your external SSD’s can be recovered.

Traditionally, there were Full and Quick format operations available. Formatting a disk with Full format would overwrite the content of a hard disk, while performing a Quick format would simply reset the file system, enabling tools such as Hetman Partition Recovery to recover files from a formatted drive quickly and reliably. These rules no longer apply to SSD drives. The very moment the user formats the disk with either Full or Quick format, the operating system issues a TRIM command, and the SSD controller starts physically erasing the content of previously occupied data blocks. This, again, does not work momentarily, but most controllers are designed to return zeroes immediately after the TRIM command has been executed. While some exceptions apply (see above), formatted SSD drives are mostly unrecoverable – even after Quick format.

What if your SSD drive got corrupted, badly damaged (on a logical level) or becomes unreadable or inaccessible? Ironically, in this case the files are still safely stored on the disk because the TRIM command was never issued by the operating system. In other words, you can use data recovery tools such as Hetman Partition Recovery to recover files from a damaged, corrupted, unreadable or inaccessible SSD drives – and get all or most data back in very little time.

To prevent situations with unexpected drive crashes, keep an eye on S.M.A.R.T. parameters of the SSD drive and exchange your drive in advance.

S.M.A.R.T. Parameters and Early Signs of a Failing Hard Disk

How to Lose Digital Photos Fast